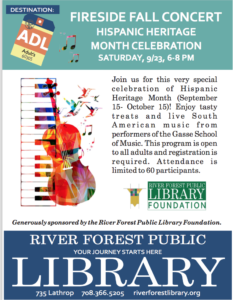 Save the date! Dr. Daniel Gasse and Mrs. Hulya Alpakin-Luethi will present a cello and piano recital at the River Forest Public Library, 735 Lathrop Ave., on Saturday, September 23rd. The event is from 6 – 8 pm, with the recital 6:30 – 7:30 pm. Information about the recital can be found here. The program will include Spanish and Argentine composers (Granados, de Falla, Guastavino, Ginastera and Piazzolla).
A wine and cheese reception featuring Argentinian wine follows
the recital, so the event is for ages 21+ only.
This is a free event, but you must register in advance here.
Don’t delay!
Space is limited to 60 guests!

Dr. Daniel Gasse is the co-Founding Director of the Gasse School of Music in Forest Park, Illinois, where he teaches cello, Mini Musicians classes, and coaches chamber music. Dr. Gasse has a Professor de Violoncello degree from the Concervatorio Provincal de Musica de la Provincia de Cordoba, Argentina, a Master in Music, and a Doctorate in Musical Arts with a major in Cello Performance and minor in Music Education from the University of Illinois. Dr. Gasse served as principal cellist of the Kankakee Valley Symphony Orchestra for 18 years until January 2006 and played with the Oak Park River Forest Symphony Orchestra for 9 years until 2015. Previous professional experience includes being the cellist in the Convergence String Quartet and a member of the Chicago Twentieth Century Music Ensemble until the end of their regular performances.
As a recitalist and soloist Dr. Gasse performed numerous times with orchestras in Argentina, Brazil, Uruguay, Paraguay and the United States. He also has held the position of principal or assistant principal cellist in orchestras in Argentina, Brazil and the U.S. He is a former faculty member of Columbia College and Olivet Nazarene University. He was also the music director of the Suzuki-Orff School for Young Musicians in Chicago for 12 years, until 2002. Dr. Gasse is also the author of the books The Music Written for the Cello by Argentinean Composers and The History of Spain Through the Arts. He co-authored, with Emi Murata and Sarah Gasse, Piano Trios for Tots through Teens, an annotated catalog created with the intention of helping students, parents and teachers find works appropriate for the level and age of the performers. As part of that project, the Gasses, including their children Ernesto and Antonio and several students, performed 6 presentations in the area, including one at the Music Teacher National Association conference in Chicago in 2014.

Hülya Alpakin-Luethi is a native of Turkey and holds a Bachelor Degree in piano from Istanbul State Conservatoire, a Master’s Degree in piano performance, and an Artist Diploma, both from the Chicago College of Performing Arts at Roosevelt University. Since 1992 she has performed internationally as soloist, as part of ensembles, and as accompanist. Her performances have been featured on the radio and on records, among them compositions especially dedicated to her. Mrs. Alpakin-Luethi studied piano with the distinguished Turkish pianist Hülya Saydam, pianist, orchestra conductor, and composer Serdar Yalcin, Professor Esin Kanberoglu, Dr. Ludmila Lazar, and internationally famous pianist Graham Scott. As a teacher she has more than 30 years of experience. She has been invited several times as a judge to the Roberta Savler Piano Contest of the Chicago Area Music Teachers Association (CAMTA). Mrs. Alpakin-Luethi performed as an ensemble member of Palomar with Access Contemporary Music (ACM) for ten years. Currently she teaches at Gasse School of Music and privately. She also is continuing to perform as a soloist and an ensemble player.

The Gasse School of Music (Forest Park, IL) is an institution committed to providing quality music education for students of all ages. The school provides individual and group instruction with an emphasis on self-expression, creativity, teamwork, fun, and proper technique. Lessons are given in instrumental music (piano, violin, viola, cello and guitar), elementary music for early child chamber music and music reading. The school promotes public performances by its students, faculty and guest artists. For more information, check their website: www.gasseschoolofmusic.org

Enrique Granados – Gaspar Cassado (1867 – 1916) Enrique Granados was a Spanish pianist and composer of classical music. Granados’ 1911 composition, Goyescas, based on paintings by Francisco Goya, was so successful that Granados made it into an opera in 1914. However at the close of WW1 tragedy struck Grabados when the boat he and his wife were aboard was struck by a torpedo from a German U-boat. The Intermezzo from Goyescas was transcribed for cello and piano by Gaspar Cassado (1897 –1966), a Spanish cellist and composer of the early 20th century.

Manuel de Falla (1876 – 1946) was born in Spain. He lived in Argentina from the age of 63 until his death in Alta Gracia, a town a few miles from Cordoba, Dr. Gasse’s hometown. In his 30s, Falla lived in Paris where he met and was influenced by impressionist composers Maurice Ravel, Claude Debussy, Paul Dukas, and Igor Stravinsky. Falla’s interest in Andalusian music, particularly Andalusian flamenco finds expression in Suite Popular Espanola.

Carlos Guastavino (1912 – 2000) composed over 500 works during his lifetime, perhaps making him Argentina’s most prolific composer. Similar to Stephen Foster, Guastavino is remembered for his folk influenced songs, many of which have become national favorites. La Rosa y el Sauce is based on a surrealist poem “The Rose and the Willow” by Francisco Silva about the longing of a willow for a rose which was taken from it by a young maiden. It is Guastavino’s only work exclusively for piano and cello.

Alberto Ginastera (1916-1983) is considered one of the most important 20th-century classical composers of the Americas. After being dismissed from his teaching position in 1945 for criticizing Juan Peron’s policies, Ginastera studied with Aaron Copland at Tanglewood.

Triste is the second movement of Ginastera’s Cinco Canciones Populares Argentinas (opus 10) written in 1943. Cinco Canciones is a compilation of five songs for voice and piano taken from the popular vernicular. Triste (“sad, sorrowful”) is a nostalgic song of unrequited love with roots in the indigenous cultures of Argentina. This transcription for piano and cello is by the French cello virtuoso Pierre Fournier.

Pampeana, means “from the Pampas”. Inspired by folkloric themes of the Argentine plains, Ginastera composed three pampeanas. Pampeana No. 2 (1950) was composed for his wife, the Argentine cellist Aurora Natola.

Astor Piazzolla (1921-1992); Piazzolla is most famous as the Argentine composer of tangos, and as the bandoneón player who revolutionized the traditional tango into a new style called nuevo tango. Piazzolla’s nuevo tango incorporated elements of jazz, harmonies and dissonance, counterpoint, and extended compositional forms. All these elements are present in El Gran Tango.

The fast-slow-fast form used in the piece is a coy nod to the 3 movements in Baroque concertos. The dialogue between piano and cello are reminiscent of the sensual and choreographically intense interactions of tango dancers. To Argentines, the flamboyant finale calls to mind the “portenos compadritos”- the brash rural men who migrated to Argentina’s urban centers looking for opportunity.